1 Why is it useful categorize networks by size when discussing network design?

Knowing the number of connected devices will define how many additional layers will be added to the three-tier hierarchical network design.

Knowing the number of connected devices will define how many multilayer switches will be necessary at the core layer.

A high-level redundancy at the access layer may be better implemented if the number of connected devices is know.

The complexity of networking infrastructure will vary according to the number of connected devices.*

2 Which two statements are true regarding a PPP connection between two Cisco routers? (Choose two.)

Only a single NCP is allowed between the two routers.
NCP terminates the link when data exchange is complete.
With CHAP authentication, the routers exchange plain text passwords.
LCP tests the quality of the link.*
LCP manages compression on the link.*

it assigns incoming electrical signals to specific frequencies.
it can be used in long-range communications, like connections between ISPs.*
it enables bidirectional communications over one pair of copper cables.
it supports the SONET standard, but not the SDH standard. 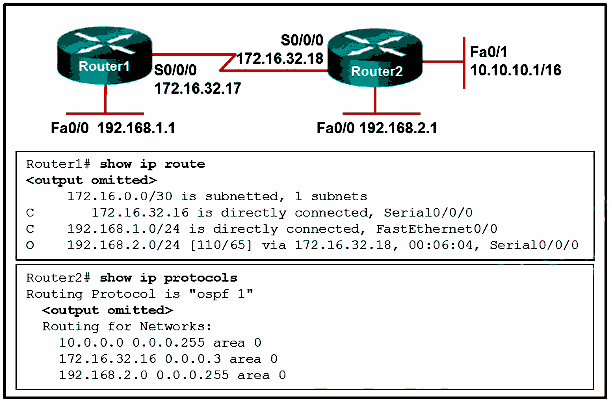 Refer to the exhibit. A network administrator is troubleshooting the OSPF network. The 10.10.0.0/16 network is not showing up in the routing table of Router1. What is the probable cause of this problem?

6 The security policy in a company specifies that the staff in the sales department must use a VPN to connect to the corporate network to access the sales data when they travel to meet customers. What component is needed by the sales staff to establish a remote VPN connection?

7 A network administrator is troubleshooting the dynamic NAT that is configured on router R2. Which command can the administrator use to see the total number of active NAT translations and the number of addresses that are allocated from the NAT pool?

8 Which three parts of a Frame Relay Layer 2 PDU are used for congestion control? (Choose three.)

10 Which WAN technology can serve as the underlying network to carry multiple types of network traffic such as IP, ATM, Ethernet, and DSL? 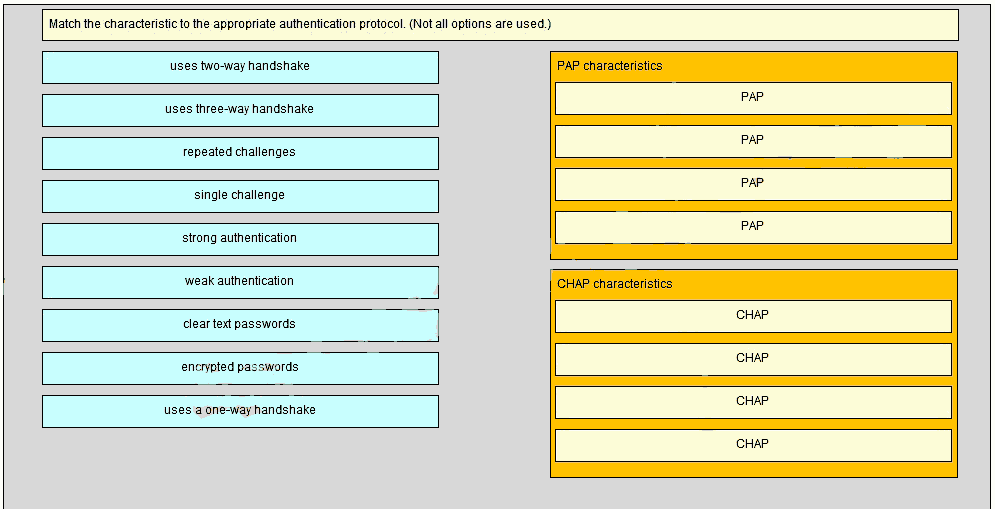 12 Which command can be used to check the information about congestion on a Frame Relay link?

Refer to the exhibit. Which three steps are required to configure Multilik PPP on the HQ router? (Choose three.)

15 What are two examples of network problems that are found at the data link layer? (Choose two.)

16 What is the protocol that provides ISPs the ability to send PPP frames over DSL networks?

17 What is required for a host to use an SSL VPN to connect to a remote network device?

Refer to the exhibit. A network administrator has implemented the configuration in the displayed output. What is missing from the configuration that would be preventing OSPF routing updates from passing to the Frame Relay service provider?

Refer to the exhibit. An administrator is configuring NAT to provide Internet access to the inside network. After the configurtation is completed, users are unable to access the internet. What is the cause of the problem?

The inside and outside interfaces are backwards.
The ACL is referencing the wrong network address.
The NAT inside source command is referring to the wrong ACL.*
The NAT pool is using an invalid address range.

20 A company connects to one ISP via multiple connections. What is the name given to this type of connection?

Refer to the exhibit. On the basis of the output, which two statements about network connectivity are correct? (Choose two.)

What is the effect of these commands?

Refer to the exhibit. What kind of NAT is being configured on R1? 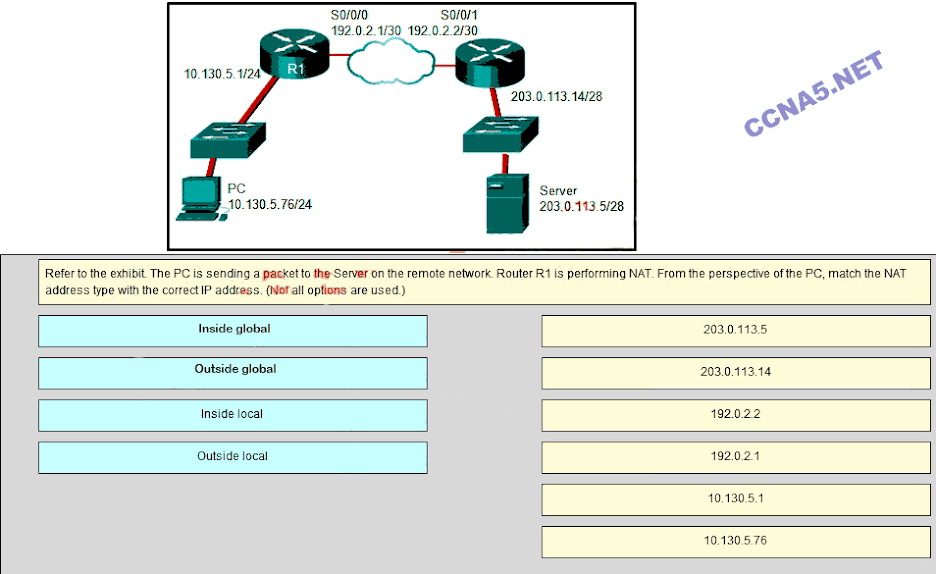 Place the options in the following order:

27 What is the default location for Cisco routers and switches to send critical logging events?

28 In the data gathering process, which type of device will listen for traffic, but only gather traffic statistics?

29 What is a characteristic of Frame Relay that allows customer data transmissions to dynamically “burst” over their CIR for short periods of time?

The combination of LMI status messages and Inverse ARP messages enables the CIR to be exceeded.
The physical circuits of the Frame Relay network are shared between subscribers and there may be times when unused bandwidth is available.*
BECN and FECN messages notify the router that the CIR can be exceeded.
Bursting is enabled by the configuration of multiple subinterfaces on one physical interface.

31 Which statement is a characteristic of SNMP MIBs?

The SNMP agent uses the SNMP manager to access information within the MIB.
The MIB structure for a given device includes only variables that are specific to that device or vendor.
The MIB organizes variables in a flat manner.
The NMS must have access to the MIB in order for SNMP to operate properly.*

32 What benefit does NAT64 provide?

33 What is the expected behavior of an ADSL service?

34 The DLCI number assigned to a Frame Relay circuit is to be manually added on a point-to-point link. Which three subinterface commands could be used to complete the configuration? (Choose three.)

35 A group of Windows PCs in a new subnet has been added to an Ethernet network. When testing the connectivity, a technician finds that these PCs can access local network resources but not the Internet resources. To troubleshoot the problem, the technician wants to initially confirm the IP address and DNS configurations on the PCs, and also verify connectivity to the local router. Which three Windows CLI commands and utilities will provide the necesary information? (Choose three.) 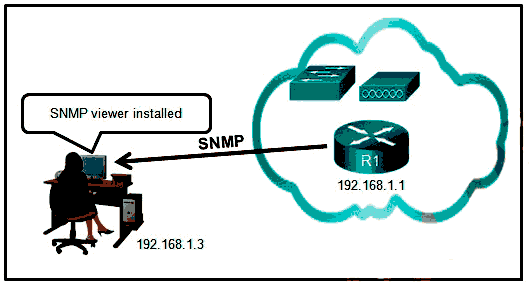 Refer to the exhibit. Router R1 was configured by a network administrator to use SNMP version 2. The following commands were issued:

Why is the administrator not able to get any information from R1?

37 Which broadband technology would be best for a small office that requires fast upstream connections? 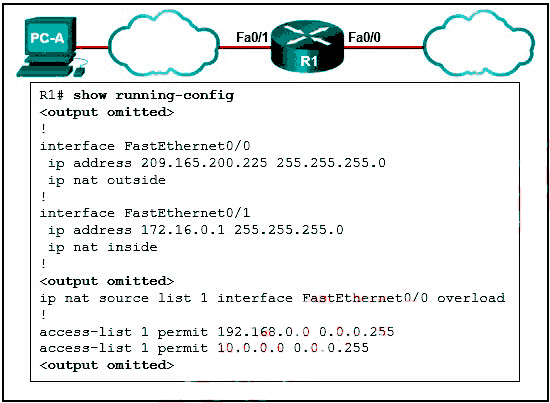 Refer to the exhibit. The inside local IP address of PC-A is 192.168.0.200. What will be the inside global address of packets from PC-A after they are translated by R1?

39 What is a type of VPN that is generally transparent to the end user?

40 Which two statements about DSL are true? (Choose two.)

user connections are aggregated at a DSLAM located at the CO*
uses RF signal transmission
users are on a shared medium
local loop can be up to 3.5 miles (5.5km)*
physical and data link layers are defined by DOCSIS

Refer to the exhibit. Which three events will occur as a result of the configuration shown on R1? (Choose three.)

Traffic is allocated bandwidth across a single wire based on preassigned time slots.*
Bandwidth is allocated to channels based on whether a station has data to transmit.
Encoding technology provides high data throughput in a minimum RF spectrum by supporting parallel data transmission.
Data capacity across a single link increases as bits from multiple sources are transmitted using interleaved slices of time.*
Depending on the configured layer 2 protocol, data is transmitted across two or more channels via the use of time slots.

43 Which two specialized troubleshooting tools can monitor the amount of traffic that passes through a switch? (Choose two.)

44 Which circumstance would result in an enterprise deciding to implement a corporate WAN?

45 Which algorithm is considered insecure for use in IPsec encryption?

46 What is one advantage to designing networks in bulding block fashion for large companies? 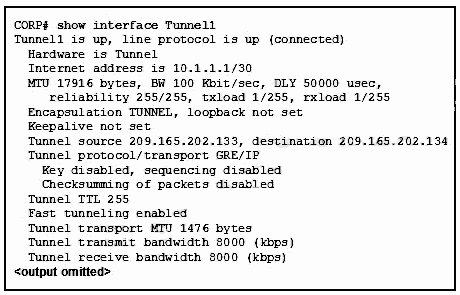 Refer to the exhibit. Which IP address is configured on the physical interface of the CORP router?

50 How many 64 kb/s voice channels are combined to produce a T1 line?

51 Which network module maintains the resources that employees, partners, and customers rely on to effectively create, colaborate, and interact with information?

52 Which broadband solution is appropriate for a home user who needs a wired connection not limited by distance?

53 A network administrator is asked to design a system to allow simultaneous access to the Internet for 250 users. The ISP can only supply five public IP addresses for this network. What technology can the administrator use to accomplish this task?

54 What is the purpose of a message hash in a VPN connection?

55 Which type of traffic would most likely have problems when passing through a NAT device?

56 Users are reporting longer delays in authentication and in accessing network resources during certain time periods of the week. What kind of information should network engineers check to find out if this situation is part of a normal network behavior?

57 What are three benefits of using Frame Relay for WAN connectivity? (Choose three.)

58 What type of information is collected by Cisco NetFlow?

59 Which technology requires the use of PPPoE to provide PPP connections to customers?

60 Under which two categories of WAN connections does Frame Relay fit? (Choose two.)

61 What are three characteristics of the generic routing encapsulation (GRE) protocol? (Choose three.)

GRE tunnels support multicast traffic.*
GRE creates additional overload for packets that are traveling through the VPN.*
GRE uses AES for encryption unless otherwise specified
By default, GRE does not include any flow control mechanisms.*
Developed by the IETF, GRE is a secure tunneling protocol that was designed for Cisco routers.
GRE provides encapsulation for a single protocol type that is traveling through the VPN.

62 An intercity bus company wants to offer constat Internet connectivity to the users traveling on the buses. Which two types of WAN infrastructure would meet the requirements? (Choose two.)

63 What is used as the default event logging destination for Cisco routers and switches?